Latest Issue of “Together”

Here’s Issue 17 of “Together” — the newsletter of the faculty union of VSC & CCV.

Our Union is focusing on legislation that would increase the funding for CCV and other Vermont State Colleges. We are also pushing for more aid and more support for our students. This legislation session is seeing a lot of activity both in the Senate and the House on spending bills funding the VSC so the ​time is now to get involved​! Any action you take now can have a significant impact on funding and the lives of our students and the stability of CCV.

Why an increase in State support to CCV and free/reduced tuition is important:

Ways to get more involved and make a difference.

Building an internal structure to build membership and enforce the contract

Now that we, CCV United Faculty, have successfully won a union election and bargained a first contract it is time to develop an internal organization to enforce the contract (through membership development, education and grievance work) and make decisions.

The best practice is to create a steward structure that is representative of the membership. This is so that there is a clear network to be able to communicate proactively as necessary and also have a sufficient number of colleagues to provide support as necessary.

Stewards can be nominated or volunteer. Initial nominations will be taken through the Fall ‘18 and can continue in a rolling basis with emphasis given to recruiting:

As part of the new contract the Administration “shall provide the Union with the value of one (1) three credit course to be provided to a Union officer, or faculty member designated by the Union, for purposes of conducting Union business.” This proposal has the union splitting this stipend three ways to have three elected and stipended union positions to do union work including membership development and grievance processing.

It will be important to have a small elected executive body to be able to make decisions in a timely fashion as necessary. A good practice is for these elected representatives to also be involved as stewards so as not to be removed from the challenges faculty are experiencing.

In addition to the 3 positions noted in the above section, this proposal includes another two elected positions whose main role is to be CCVUF representatives to the VSC Faculty Federation Delegate Assembly. (See Below)

During fall semester 2018, from the pool of committed stewards, the union will hold an election for a 5 member executive committee. Three seats will be the paid membership/grievance positions and 2 VSCFF Delegate reps.

August, September and beyond:​ Nominations are taken for union stewards.

If CCVUF decides we shall integrate formally with our VSCFF colleagues, VSCFF will need to amend their constitution to reflect the change. They are asking us to let them know what our structure would be so they can make recommendations to their membership accordingly. Based on the proposals above, here is the draft recommendation.

Under this proposal, in addition to proper representation on the VSCFF delegate assembly we shall also send our dues to the treasury of the VSCFF. It is the delegate assembly, who makes decisions about allocation of funds.

Under this proposal should we, CCV faculty, choose to integrate with the existing VSC Faculty Federation, we would adopt the dues amount that their union members currently pay, which is 1% of their wages​. This is the same amount of all other AFT Vermont Locals (except the Nurses at UVMMC who decided to pay a bit more). What this means:

It’s official! We have signed our very first faculty contract at CCV! So much hard work, commitment, and dedication went into this. Congrats everyone. A special thanks to our bargaining team! Elisabeth Garretson Lehr, Emily Casey Kathleen Moore, Laura Gannon Murakami, Valerie Welter, Jill Mudcock, Luigi Colasanto, Peter Money, Victor P. Ehly, Jean Cannon… as well as Carla & Bill! Of course, so many more of you made this happen. Together we are stronger! This is an historic first step for our union and our college. 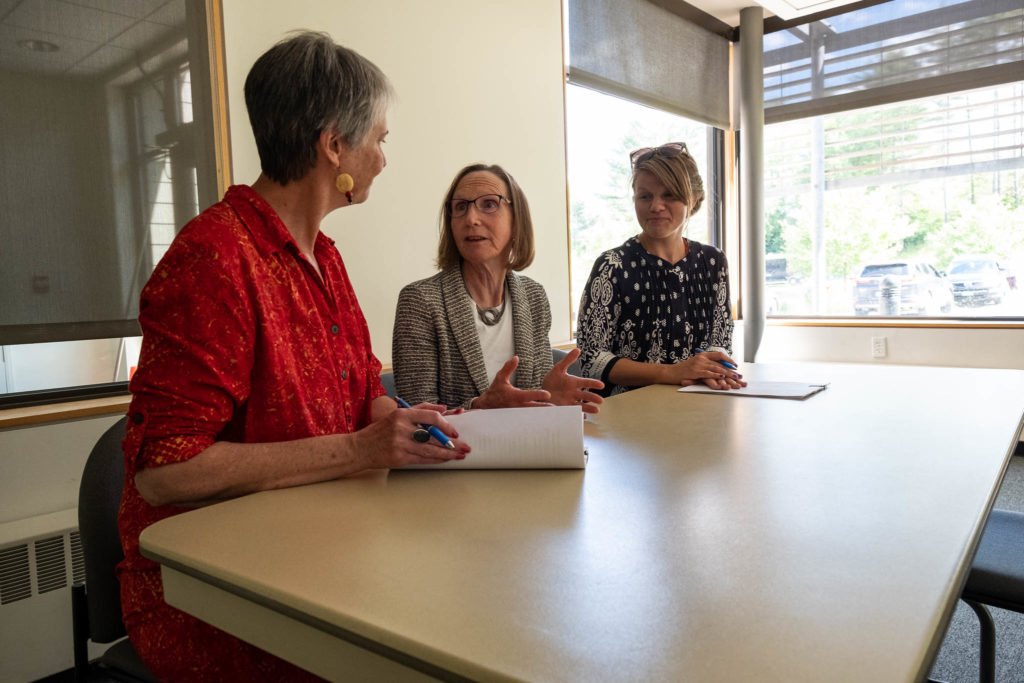 Photos by Josh Larkin, courtesy of Community College of Vermont

Are you a member?

CCV faculty: Have you signed and return your membership card yet?
Download it here.

As early as spring of 2014 CCV faculty were discussing the work of forming a faculty union. The process of connecting with each other and organizing a group of committed faculty to form a union took some time, but by the Spring of 2017 we were confident that the majority of CCV faculty wanted a union to represent our interests. In October of 2017, 81% of the eligible CCV faculty voted and the results revealed a strong majority in favor of union representation by the American Federation of Teachers (AFT) union.

The adjunct faculty of the Community College of Vermont are committed to a fair and progressive agenda that supports faculty in providing quality instruction built on strong academic standards, that promotes faculty support of students and that works for college affordability.

As professionals in our fields, we seek to formalize our faculty voice in curriculum and program development, course assignments and compensation. We seek to strengthen faculty evaluation and grievance procedures and to create an organized voice for faculty, both at the Vermont statehouse and nationwide.

A CCV faculty union will be a powerful voice for a collaborative educational atmosphere, fair and just working conditions and accessible, high-quality education for all.